Need an Air Conditioner But Don’t Have Ducts? 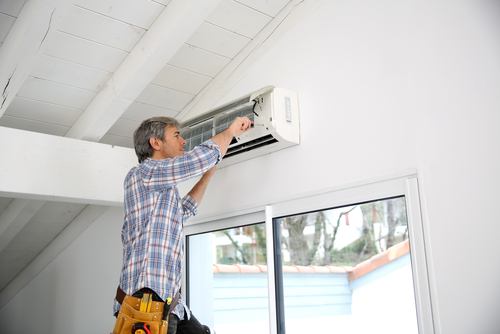 As scorching or humid summer days approach, you may be second-guessing the purchase of that vintage or historic home you’ve had your eye on. In fact, in many places homes as new as 15 to 20 years may not have air conditioning. If your home doesn’t have ductwork and is missing the attic, basement or crawlspace to add it, what can you do?

In know, I know … visions of unsightly window air conditioners dance in your head and the though of giving up a window makes you wince. Be encouraged … other options exist to see you through the hottest days.

Used extensively in Europe and Asia, and often seen in hotels in the United States, a mini-split or ductless air conditioner mounts one unit on the inside wall and one unit on the outside wall. The inside unit blows cool air into the room and houses any climate controls and the outer unit that brings in the air and expels the “condensate” or moisture through a drain. Between the two systems run refrigerant lines, the power source and the tubing.

Mini-split systems work great for retrofitting an older home, or for adding air conditioning to a room addition not connected to the main ductwork. In fact, installation typically requires just a three-inch hole for the conduit to pass through. While often the two units mount back to back, if necessary, situating the outdoor unit as far as 50 feet away offers more flexibility. In fact, cooling rooms on the front of your home, but situating the condenser unit I a less conspicuous location allows for installation even in highly regulated neighborhoods.

While the systems themselves cost much more than a window unit—often $1500 to $2000 per 12,000 BTU/hour cooling capacity—energy savings could increase because there is less loss than a typical duct system and less air leakage than a window system. One additional advantage comes from the minimal exposure to pests through the small entry point into the wall.

A portable air conditioner is a unit that houses the blower and condenser in a single unit. They expel warm air through a small vent duct placed in an exterior window. Some portable units have two ducts … one to bring in fresh air and one to expel warm air and moisture. Additionally, many have condensation trays similar to dehumidifiers that need emptying on a regular basis.

Some portable units make quite a bit of noise, and others weigh up to 85 lbs., so “portability” may be subjective.

If your climate’s hot or humid the whole summer, you’ll want to invest in some form of air conditioning, but in more moderate climates with just a couple weeks of hot days, consider cooling with more traditional methods like ceiling fans, tower fans or even better, a whole house fan. A whole house mounts in the ceiling at the home’s highest point … such as above the top of the stairwell landing … pulls air from windows through the house and vents into the attic. Ranging from $200 to $800, a whole house, high capacity fan runs more quietly and efficiently at lower speeds. Even at hotter temperatures, the moving air evaporates perspiration from the skin, allowing inhabitants to feel cooler.